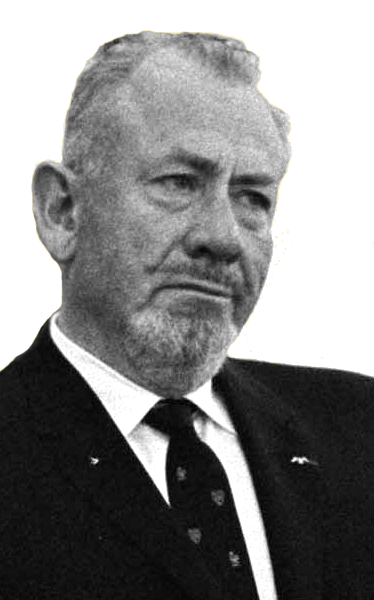 "John Steinbeck," photographed by The White House, 1966. Larger.
Although commonly seen as garden pests, some of California's special gophers are industrious homemakers—just as human Californians often are.

A well-grown gopher took up residence in a thicket of mallow weeds in the vacant lot on Cannery Row. . . . When he had dug his great chamber and his four emergency exits and his waterproof deluge room, the gopher began to store food. He cut down only the perfect mallow stems and trimmed them to the exact length he needed and he took them down the hole and stacked them neatly in his great chamber and arranged them so they wouldn't ferment or get sour. He had found the perfect place to live. There were no gardens about so no one would think of setting a trap for him. Cats were there, many of them, but they were so bloated with fish heads and guts from the canneries that they had long ago given up hunting. The soil was sandy enough so that water never stood about or filled a hole for long. The gopher worked and worked until he had his great chamber crammed with food.

Published in 1945, Steinbeck's Cannery Row was originally dismissed. Today, it's a popular Steinbeck work, largely responsible for the fame of Monterey's coastal street. 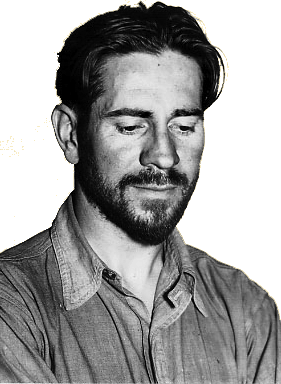 "Ed Ricketts," photographer, date unknown. Larger.
One of California's best loved writers, John Steinbeck was a keen observer of human social conditions. But Steinbeck was also fascinated by the interplay of non-human lives within the natural world.

Deeply influenced by his friend marine biologist Ed Ricketts, Steinbeck developed a keen appreciation for the intricate web of life in our oceans, as evidenced in this passage from the 1945 novel, Cannery Row.

The sea is very clear and the bottom becomes fantastic with hurrying, fighting, feeding, breeding animals. Crabs rush from frond to frond of the waving algae. Starfish squat over mussels and limpets, attach their million little suckers and then slowly lift with incredible power until the prey is broken from the rock. And then the starfish stomach comes out and envelops its food. Orange and speckled and fluted nudibranchs slide gracefully over the rocks, their skirts waving like the dresses of Spanish dancers. And black eels poke their heads out of crevices and wait for prey. . . . A wave breaks over the barrier, and churns the glassy water for a moment and mixes bubbles into the pool, and then it clears and is tranquil and lovely and murderous again.

Steinbeck's friendship with Doc. Ricketts is a subject of The Log from the Sea of Cortez, the chronicle of a 1940 research trip the two friends made to Baja California. 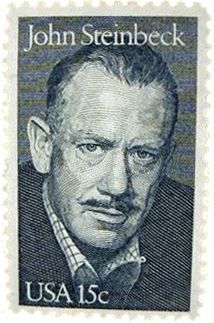 "John Steinbeck stamp," 1979. Larger.
Rising dramatically above the Pacific, the Santa Lucia Range is still terra incognita to many of Californians, unknown even to some who gaze with wonder at those Coast Range peaks every day.

John Steinbeck vividly wrote the landscape in and around his native Salinas, and he also wrote about its mysterious appeal to the imagination, especially when the imagination is that of a young boy.

Jody questioned Billy Buck, the ranch hand, about the possibility of ancient cities lost in the mountains, but Billy agreed with Jody's father.

"It ain't likely," Billy said. "There'd be nothing to eat unless a kind of people that can eat rocks live there."

That was all the information Jody ever got, and it made the mountains dear to him, and terrible. He thought often of the miles of ridge after ridge until at last there was the sea. When the peaks were pink in the morning they invited him among them: and when the sun had gone over the edge in the evening and the mountains were a purple-like despair, then Jody was afraid of them; then they were so impersonal and aloof that their very imperturbability was a threat.

"The Great Mountains" was included in The Red Pony—stories, Steinbeck said, of "loss and acceptance and growth—first published together in 1937. 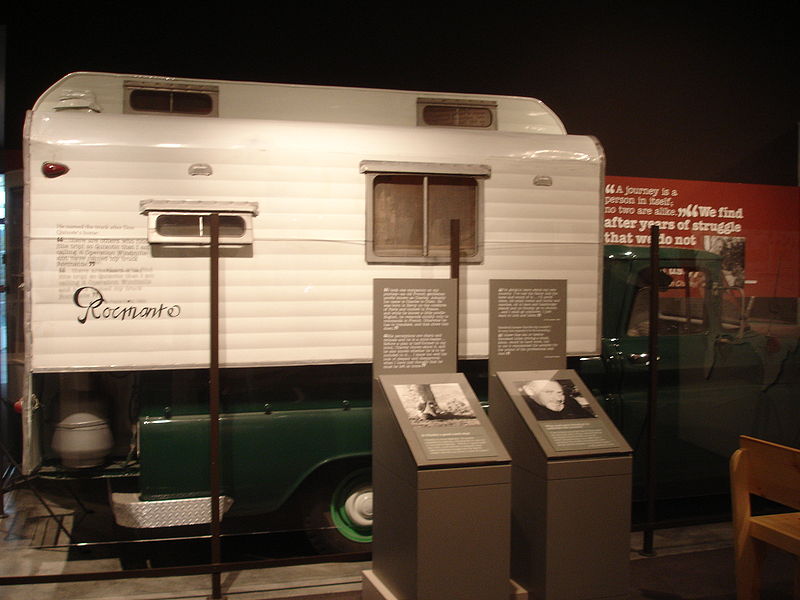 "Rocinante, Steinbeck's camper truck," photographed by WikiMedia user Lord Harris, 2007. Larger.
As hard as leaving home can be, going home is sometimes even more difficult—especially when everything you remember has changed.

At the tail-end of a cross-country car trip with his French poodle, Charley, John Steinbeck confronted the challenge of returning to his home town, Salinas.

I find it difficult to write about my native place, northern California. It should be the easiest, because I knew that strip angled against the Pacific better than any place in the world. But I find it not one thing but many—one printed over another until the whole thing blurs. What it is is warped with memory of what it was and that with what happened there to me, the whole bundle wracked until objectiveness is nigh impossible. This four-lane concrete highway slashed with speeding cars I remember as a narrow, twisting mountain road where the wood teams moved, drawn by steady mules....This was a little little town, a general store under a tree and a blacksmith shop and a bench in front on which to sit and listen to the clang of hammer on anvil. Now little houses, each one like the next, particularly since they try to be different, spread for a mile in all directions. That was a woody hill with live oaks dark green against the parched grass where the coyotes sang on moonlit nights. The top is shaved off and a television relay station lunges at the sky and feeds a nervous picture to thousands of tiny houses clustered like aphids beside the roads.

At the age of 58, Steinbeck and his pooch set out to rediscover America. He wrote about his journey in Travels with Charley, published in 1962. 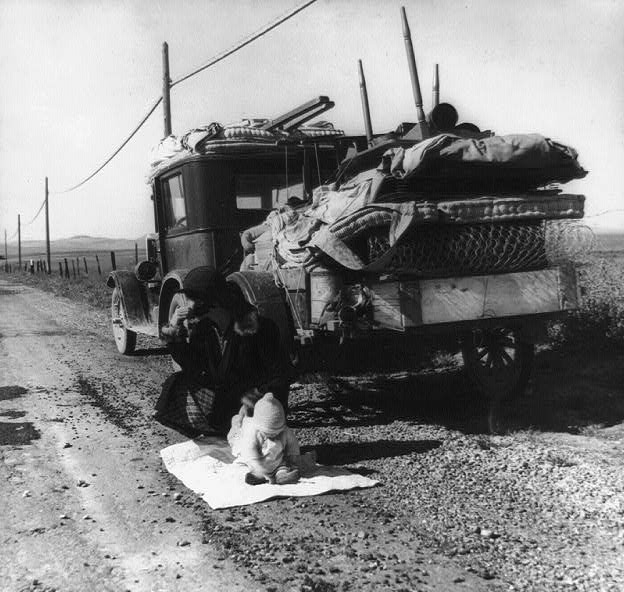 "Missouri family of five," photographed by Dorothea Lange, 1937. Larger.
Jazz great Bobby Troup once told us to "Get your kicks on Route 66." But during the depression that wasn't such an easy thing to do.

The historic Route 66 once provided a major corridor to California—and a mode of escape for those fleeing the terrible conditions of Dustbowl America, as John Steinbeck showed in his 1940 classic, The Grapes of Wrath.

66 is the path of a people in flight, refugees from dust and shrinking land, from the thunder of tractor and shrinking ownership, from the desert's slow northward invasion, from the twisting winds that howl up out of Texas, from the floods that bring no richness to the land and steal what little richness is there. From all of these the people are in flight, and they come into 66 from the tributary side roads, from the wagon tracks and the rutted coutry roads. 66 is the mother road, and the road of flight. . . .

'F we can on'y get to California where the oranges grow before this here ol' jug blows up. 'F we on'y can.

The Dust Bowl—a result of severe drought and decades of poor farming practices—lasted almost a decade. 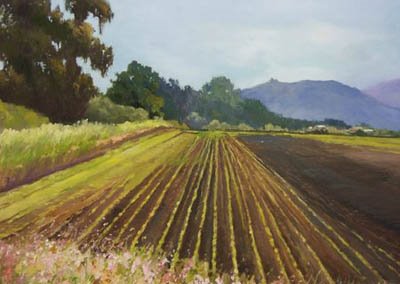 "Salinas Field," painting © Maralyn Miller -All Rights Reserved- Date unknown. Larger.
The California spring has always brought new life, a source of hope even during the bleakest years of the Great Depression.

In his 1939 novel The Grapes of Wrath, John Steinbeck captures this hopefulness in a compelling description of bountiful orchards and fields.

The spring is beautiful in California. Valleys in which the fruit blossoms are fragrant pink and white waters in a shallow sea. Then the first tendrils of the grapes, swelling from the old gnarled vines, cascade down to cover the trunks. The full green hills are round and soft as breasts. And on the level vegetable lands are the mile-long rows of pale green lettuce and the spindly little cauliflowers, the gray-green unearthly artichoke plants. And then the leaves break out on the trees, and the petals drop from the fruit trees and carpet the earth with pink and white. The centers of the blossoms swell and grow and colors: cherries and apples, peaches and pears, figs which close the flower in the fruit. All California quickens with produce, and the fruit grows heavy, and the limbs bend gradually under the fruit so the little crutches must be placed under them to support the weight. . . .

John Steinbeck's The Grapes of Wrath also shows how the lovely promise of spring was not always fulfilled for those who worked California's fields.