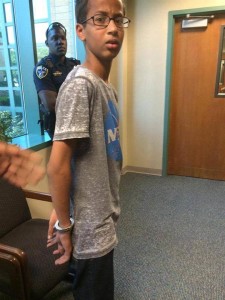 You have either been living in a bubble for the past couple of days, or too distracted with the Trump-Mania going on because those are the only two ways you have not heard about Ahmed Mohammed. Ahmed was a 14 year old high school freshman in Dallas, Texas, who built a homemade clock in order to impress his teachers. What happened next is what has everyone in shock, one of Ahmeds teachers suspected the homemade clock was actually a bomb and shortly after the police were called. The controversy that ensued sheds the light on a bigger issue here in America, and that is racial profiling. Now I know this isn’t a blog about racial issues, to be honest, we face enough of that in the news, but when it comes into the mix with technology it makes it a little hard to ignore.

We are in the digital age, everything and anything can be shared in a matter of seconds, so it is no surprise to me that the world found out about Ahmeds incident so rapidly. This is the awesome part about technology today, we get to share not only the bad, but the good as well, Ahmed has received an overwhelming amount of support from people all over the world. Which shows that we as a people have the ability to support and stand next to one another during times of hardships.

I want to go back to the headline for a minute, why should we care who this Ahmed kid is? While visiting my friend’s New York Web design office, we got into a conversation about where America is heading and how technology has enabled it to grow beyond what anyone thought possible. I agreed with him, but I also mentioned that the technology has also hindered us, and has made us value people less and our possessions more. We went back and forth on this for a little bit before we saw a report about Ahmed Mohammed, and what it led us to realize is that technology has given us the ability to make up our own minds, we can now be informed enough to decide how we feel about certain situations and voice that opinion as well. So while there are some set backs with technology the advancements outweigh them by far.

Ahmed Mohammed is important because it is the ultimate example of people using technology to empower themselves and the world.