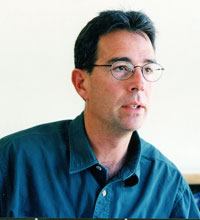 Biographical Note
Beers has a Ph.D. in English from the University of Southern California. Since 1987, he has taught writing and literature at Santa Clara University, where he is currently an associate professor in the English department and director of the California Legacy Project. From 1991-1997, he was the executive director of the Robinson Jeffers Association. He also serves as the general editor of the California Legacy series of books, co-published by Santa Clara University and Heyday Books.